Justicia in Mundo – Justice in the World 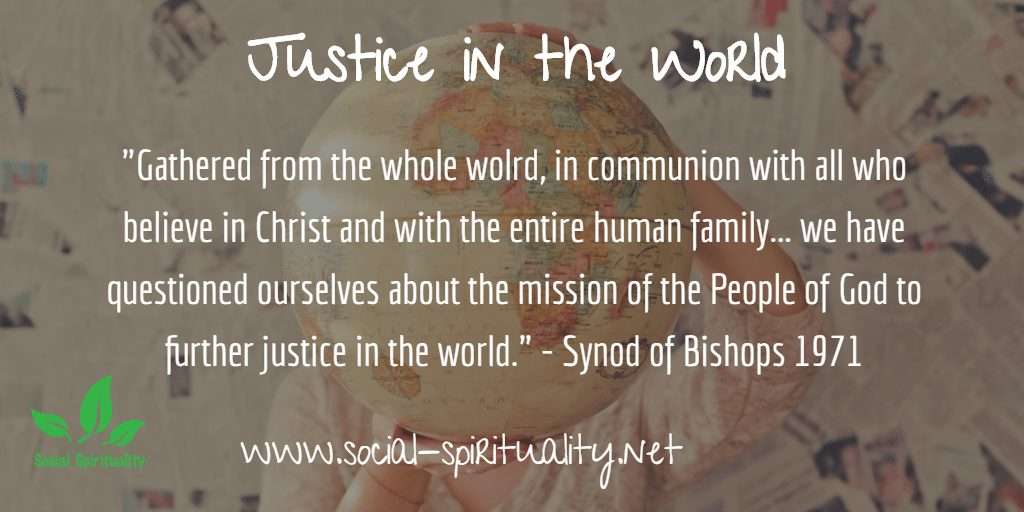 The 1971 Synod of Bishops statement Justicia in Mundo is also known as Justice in the World. It is not a social encyclical, or a Papal document, but it is still regarded as one of the major international Catholic Social Teaching documents. Bishops from all over the world gathered in a meeting known as a Synod in 1971. They gathered to read the signs of the times and discern how the Church should respond.

Justicia in Mundo’s proclamation that work for the promotion of justice is an essential part of the mission of the Church is probably the most famous quote from Catholic Social Teaching:

“Action on behalf of justice and participation in the transformation of the world fully appear to us as a constitutive dimension of the preaching of the Gospel, or in other words, of the Church’s mission for the redemption of the human race and its liberation from every oppressive situation.” (Introduction)

Some of the questions addressed by the Synod of Bishops in Justicia in Mundo include:
– technology
– the right to development
– migrants
– the arms race
– nationalism
– racial and class divisions
– and the concentration of the world’s wealth (ch 1).

The ethical methodology of the Synod is inductive and historically grounded. The Bishops’s objective in scrutinising the signs of the times was to “detect the meaning of emerging history”. They begin from the questions of the day and reflect on them in the light of the Gospel to draw lessons for action. Scripture is an important source for this message.

Justicia in Mundo was the first major example of the collegial exercise of teaching authority in the Post Vatican II period. It stated categorically that Christianity cannot be purely other-worldly but requires social engagement. It also spelt out that Christian social morality cannot proceed in isolation from the Gospel, grace and redemption. Justicia in Mundo was the first Catholic Social Teaching document to acknowledge that the Church must witness to justice in its own life in order to be credible when calling for justice in the world.

2 thoughts on “Justicia in Mundo – Justice in the World”