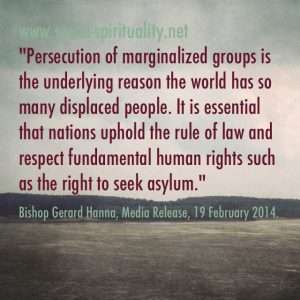 Bishop Gerard Hanna, the Australian Catholic Bishops’ Delegate for Migrants and Refugees expressed deep sadness at the death of an asylum seeker detained on Manus Island. A riot at the Australian funded offshore detention facility left dozens of other asylum seekers injured.

The Australian Catholic Migrant and Refugee Office called on the Australian government to ensure each person’s claim for protection is considered under Australian Law by competent independent authorities, with appropriate legal assistance and access to an independent judiciary such as the Refugee Review Tribunal.

How might we move people’s hearts to welcome, rather than seeking to deter, those who seek asylum? What causes us to reject and to marginalize some groups of people?